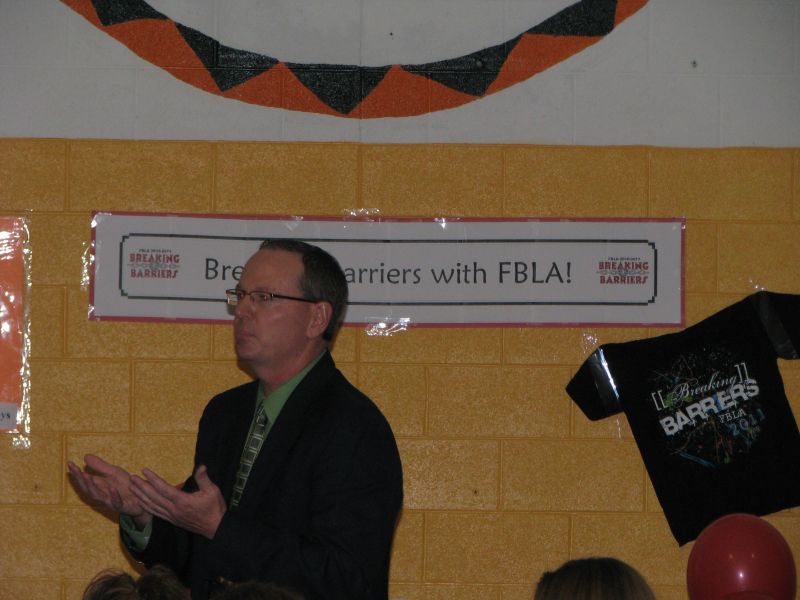 The Osmond Future Business Leaders of America held their annual Awards Ceremony on Tuesday, May 3rd.  The program was held in the Multi-Purpose Room.
Stephanie Schumacher, Vice President of the FBLA gave the welcome for the evening.  Emily Brummels, Secretary provided the Invocation before a buffet dinner was served.
The FBLA News Reporter, Laurel Krohn introduced Mr. Dave Hamm, Superintendent of Osmond Community Schools as the Keynote Speaker.  He spoke about how students should âBreak Barriersâ.  He explained the difference between âhardâ skills and âsoftâ skills that individuals possess.
The candle light installation of officers for the 2011-12 school year was then held.  The following students will be the officer team, next year:  President, Leah Gubbels; Vice President, Scot Gubbels; Secretary, Laurel Krohn; Treasurer, Sidney Ortmeier; News Reporter, Kaitlyn Miller; Historian, Morgan Brummels; and Chelsea Wiese, Parliamentarian.
Certificates of Participation were awarded to the members of the organization by Nick Penlerick, Parliamentarian and Emily Kahny, Historian.  Senior members were presented with gifts of an F.B.L.A. lapel pin.  Senior members were:  Elizabeth Brugman, Emily Brummels, Sydney Brummels, Megan Folkers, Morgan Frank, Ashley Gillilian, Emily Kahny, Jordan Koehler, Michael Koehler, Gene Richard Kumm, Brittany Penlerick, Wyatt Schuettler, Stephanie Schumacher, Aaron Stech, Karen Stech, Ethan Weeder, and Courtney Wiese.
Sydney Brummels, past President of the FBLA gave the Senior Address for 2010-2011.  She thanked the membership for their help in making the year a successful one and challenged the new officer team to work together.  Senior members presented Mrs. Manzer with a gift in appreciation for her support during the year.
State Leadership Conference participants were congratulated for their efforts at this conference.  Outstanding Member Awards were given to Seniors-Sydney Brummels and Emily Brummels; Junior-Leah Gubbels; Sophomores-Laurel Krohn and Nick Penlerick and Freshman-Kaitlyn Miller for their work during the year.  Mrs. Manzer presented Sydney Brummels with the FBLA Scholarship given annually by the FBLA.
Mrs. Manzer's presentation addressed the audience with the thought of comparing a glass of lemonade to life.  No matter what size or shape a personsâ glass is, it is merely a disguise to dress up the lemonade.  She reminded the Seniors to enjoy the lemonade (life) provided to each of them.  Mrs. Manzer also thanked the 2010-2011 officer team and congratulated and challenged the 2011-12 officer team to motivate members and improve the chapterâs performance!
Leah Gubbels, President Elect closed the evening outlining her goals for next year.
A multi-media presentation honoring the FBLA members provided the past yearâs history in review.