Today
Increasing clouds, with a high near 57. Calm wind becoming southwest 5 to 7 mph in the afternoon.
Tonight
Cloudy during the early evening, then gradual clearing, with a low around 39. South wind 7 to 11 mph becoming west after midnight. Winds could gust as high as 23 mph.
Wednesday
Sunny, with a high near 68. West wind 8 to 16 mph, with gusts as high as 26 mph.
Weather forecast provided by weather.gov.
Search

Call to order.
Call new members to front of room for induction.
Next--Business means...
What does Future mean in our name?
Leaders--are you a good one?
America--what does that mean to students/members?
New members being inducted.
It's official--you are a FBLA member!
The directions for the FBLA Scavenger Hunt.
Now the fun begins. 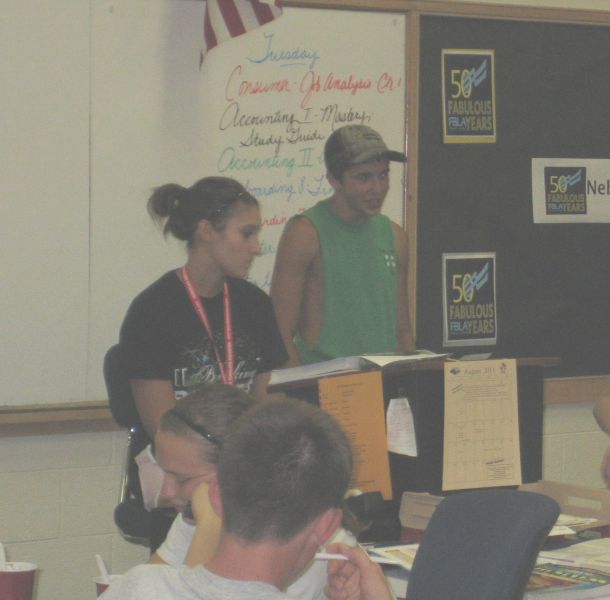 On Thursday September 15, 2011 we had our FBLA (Future Business Leaders of America) meeting. At this meeting we inducted new members into the organization; they were:  Mariah Gubbels, Seth Gutz, Jason Stech, Noah Koehler, James Stueckrath, Cameron Moes, Jenni Kopp, and Samantha Johnson.
Fall Leadership Conference was discussed.  The conference will be taking place on September 28, 2011 in Omaha.  Morgan Brummels, Leah Gubbels, Laurel Krohn, Nick Penlerick, Scot Gubbels, and Kaitlyn Miller will be attending FLC.  At this time, members will learn their duties as officers, and listen to motivational speakers.
The group also discussed some activities that are coming up in October, members were asked to watch the announcements for these events.
After the meeting the members enjoyed a Scavenger Hunt.  Members were split into groups, and then each group was given a set of clues to find the hidden letters
F B L A.  Everyone gathered for treats to end the evening.