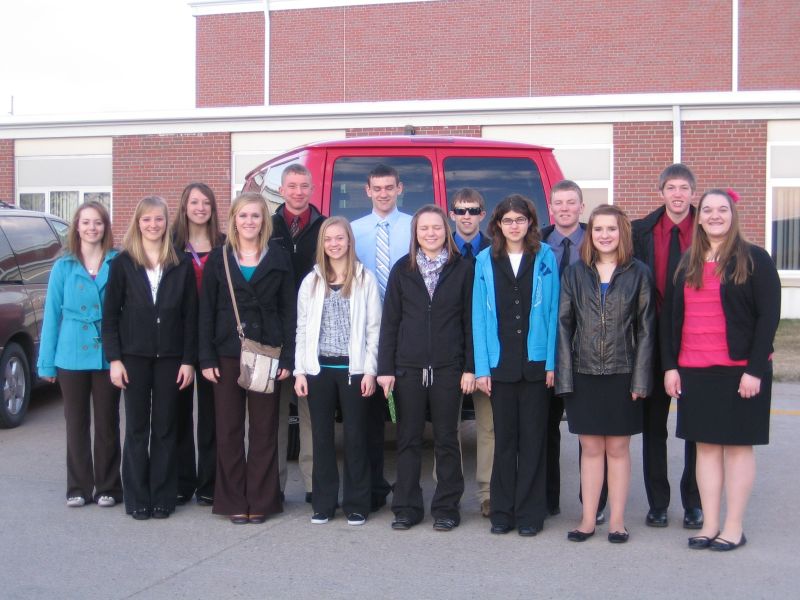 We're ready for the challenge of State Leadership Conference 2013!

Thursday, April 4th brought about the annual Future Business Leaders of America State Leadership Conference in Omaha.  Fourteen students and Mrs. Beth Manzer attended the conference.  Members attending were:  Matt Blunck, Nick Penlerick,
Blake Krienert, Daniel Wiese, Caleb Krohn, Erica Slagle, Mariah Gubbels, Kaitlyn Miller, Chelsea Wiese, Morgan Brummels, Alison Schmit, Carissa Gutz, Laurel Krohn, and Brianna Kumm.
After checking into the hotel and the conference, the Opening General Session was held.  Gus Gustafson gave the keynote address, “Turning Setbacks into Comebacks,” where he challenged students to reach out and see what others around them are experiencing!  Gus had been injured when he was 9 years and he lost his arm, part of his shoulder, and nearly lost his leg.  However, he learned to look at the positive side of things and became very successful.
Beth Manzer was presented a clock with an engraved plate on it for her 35 years of service to the FBLA organization.  Laurel Krohn was honored with the Nebraska Who’s Who Award; she received an engraved paperweight along with the honor.    Kaitlyn Miller and Laurel Krohn were awarded the Quality Member Award for FBLA for their continued service to the organization throughout the school year.  They each received a Quality Member pin and ribbon to be worn at the conference.
After the Opening General Session, the examinations began.  The students took tests in Accounting I and II, Spelling, Business Communications, Proofreading, Technology Concepts, Business Math and Calculations, Keyboarding Knowledge, Business Procedures, and Introduction to Business.  Other events at the Conference included Public Speaking I and II, Job Interview and Impromptu Speaking.  During the Job Interview Event have a “mock” interview with a businessperson.  These students have already written letters of application, and resumés in preparation for the Conference.  Senior FBLA members competed in this event.  Competition in the skills areas took place at the home schools of each chapter prior to SLC.  These events were:  Computer Applications, Word Processing I and II, Desktop Publishing, and Accounting II.
State Officer candidates had campaign booths open and also gave a two-minute presentation to the General Assembly.  On Thursday evening, all members attended the Formal Caucus where State Officer candidates answered questions from the audience.  Voting delegates from Osmond were:  Kaitlyn Miller, Chelsea Wiese, Alison Schmit and Morgan Brummels.  Friday afternoon brought the scantron voting and delegate assembly for these members.
Laurel Krohn attended the President’s Reception on Thursday evening where she received a thank-you gift from the Nebraska FBLA.
Early Friday morning students began taking another round of examinations.  They also attended seminars on varying topics:  “Fraud Trends—Don’t Be a Victim”, “Defy the Odds—Define Your Future!”, “Strength, Weakness, Mistake, Fraud?”, “How to Dress for Success”, “Perception Vs. Reality”, ”Business Idol:  Do You Have What It Takes to be No. 1?”
After a buffet dinner, the Second General Session began with the announcement that the Nebraska FBLA had 28,700 hours for the Tally It Up where community service hours are totaled, and almost $18,310 was donated to the March of Dimes organization.  Students earning recognition at this time were:  Honorable Mention—Laurel Krohn, Accounting II; Morgan Brummels, Accounting I; Matt Blunck and Daniel Wiese, Business Calculations; and Caleb Krohn, Business Math and Sports Management.  The top 4% in each event were awarded the Honorable Mentions; in the Business Calculations event, there were 528 competitors.
Saturday morning the Awards Ceremony was held.  At this time, the top eight places in each division were given.  These student awards were handed out.
8th place in Proofreading (there were 413 entries)—Caleb Krohn.
8th  place in Word Processing II—Chelsea Wiese.
6th place in Health Care Administration—Morgan Brummels.
6th place in Accounting I—Daniel Wiese.
5th place in Sports Management—Laurel Krohn.
5th place in Business Calculations—Laurel Krohn.
2nd place in Accounting I—Matt Blunck.

Matt Blunck, Morgan Brummels and Laurel Krohn will represent the Osmond FBLA at the National Conference in Anaheim, California in June.  Overall, the 2013 State Leadership Conference was a huge success for the Osmond FBLA stated Advisor Beth Manzer.