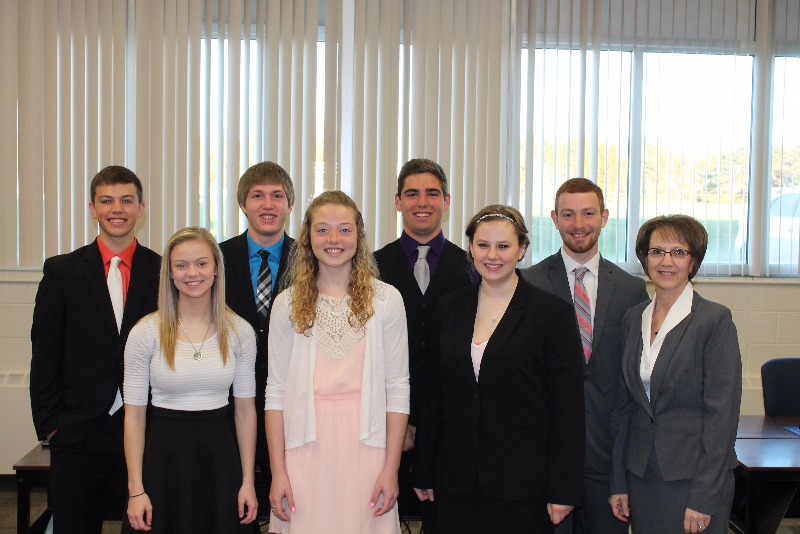 “Connect” was the theme for the Future Business Leaders of America year!  That is what the chapter believed as they worked hard all year long to be "Connected” in their business classes.  Here is a summary of the FBLA’s very successful State Leadership Conference!

The 54th annual FBLA State Leadership Conference was held in Omaha from April 7-8.  Nebraska FBLA reached a membership of 5,790 this year.  The Opening General Session of the Conference began with the keynote address, being given by Rhett Laubach.  He challenged students to reach out and see what others around them are experiencing!  He encouraged members to:  1.  Build their community; 2.  Focus on the positive; 3.  Use their momentum.

Recognized at the Opening General Session were FBLA members Caleb Krohn and Bryan Manzer for receiving the Quality Member Award for their outstanding contributions to the local chapter.  They were each given a lapel pin and a “ribbon” to wear on their name tag to show their award.  Caleb Krohn was invited to attend the President’s Reception on Thursday evening where he received a gift as a thank-you gift from the Nebraska FBLA.

Following the Opening General Session, the examinations began.  The students took exams in numerous Business areas, and participated in presentation events like speaking events and the Sales Presentation.  Tyler von Rentzell was entered in the Public Speaking II event and performed in the semi-finals of the competition.  The skills competition took place at the home schools of each chapter prior to SLC.  Diane Kruse participated in the Word Processing II event.

State Officer Candidates opened their campaign with a two-minute presentation to the General Assembly.  On Thursday evening, the candidates met on stage; for round II of the campaign.  Each officer was asked a question and then they had to respond orally at the formal caucus.  Voting delegates from Osmond were:  Diane Kruse, Bryan Manzer, and Tyler von Rentzell.  Friday afternoon brought the scantron voting and delegate assembly for these members.

Early Friday morning students began taking another round of examinations.  They also attended seminars on varying topics throughout the day.

At the Second General Session, students earning Honorable Mention were:  Business Calculations—Erica Slagle; AgBusiness—Tyler von Rentzell.  The top 4% in each event were awarded the Honorable Mention, the largest event at SLC was the Business Communications with 691 students taking the exam.

Osmond students also were awarded “ribbons” to wear on their name badges for their work in the following projects:  Feed Nebraska, Go Green, Foundation FundRaising, Step Up 2 Tech, March of Dimes and iGive.

Caleb will be eligible for National Leadership Conference Competition to be held in Atlanta, Georgia in July.

The 2016 State Leadership Conference was a success for the Osmond FBLA.  New experiences and the thrill of success after hours of hard work will be memories of this SLC!