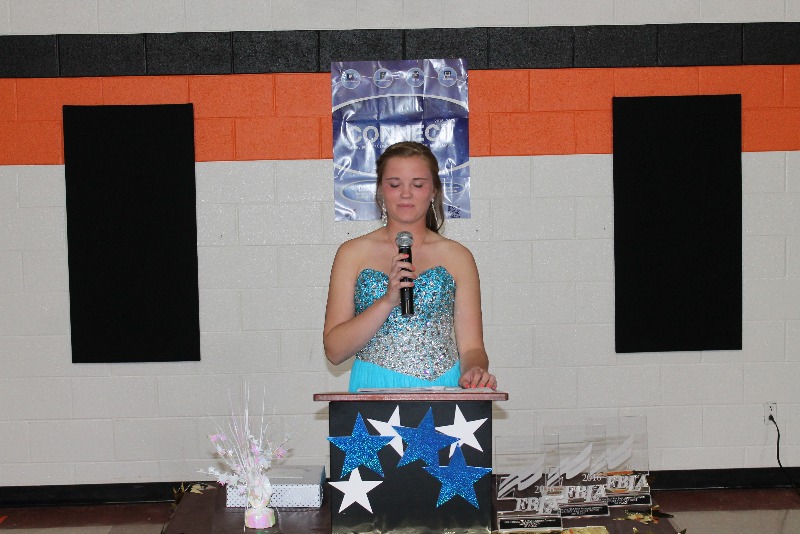 Welcoming the guests to the Awards Ceremony

The Osmond Future Business Leaders of America held their annual Awards Ceremony on Monday, May 2nd.  The program was held in the Multi-Purpose Room.  A multi-media presentation honoring the FBLA members provided the past year’s history in review.  Samantha Aschoff, Vice-President of the F.B.L.A. gave the welcome for the evening.

Leah Orr was the featured Keynote—she talked about the importance of “be”ing part of organizations and making commitments to those organizations.  She advised the members to be sure to give new things in a life a fair chance.  Leah spoke of the “connection” that everyone has with Social Media today, and told students to make sure that this was not there only “connection” because of its limitations.

Andrea Schmit presented "This Was F.B.L.A. 2015-2016" to the guests.  She reviewed the year's activities and celebrations.  Caleb Krohn, President of the F.B.L.A. gave the Senior Address for 2015-2016.  He thanked the membership for their help in making the year a successful one and challenged the new officer team to work together.

Mrs. Manzer's presentation addressed the audience with the thought of FBLA members “connecting.  She mentioned dot-to-dot drawings and how the FBLA Members started their drawings as Freshmen going from dot-to-dot (meetings, conferences, etc.), and now the Seniors have completed their drawings.  She challenged the underclassmen to continue to “connect” with each other, the community, and the world.

Mrs. Manzer presented Caleb Krohn with the FBLA Scholarships given annually by the F.B.L.A.  Outstanding Member Awards were given to Senior-Caleb Krohn; Juniors-Diane Kruse and Bryan Manzer; Sophomore-Andrea Schmit and Freshman-Kayla Wingert for their work during the year.  State Leadership Participants were also honored and congratulated for their work and received certificates from Mrs. Manzer; those members were:  Erica Slagle, Caleb Krohn, Brock Johnson, Bryan Manzer, Diane Kruse, Tyler von Rentzell, and Andrea Schmit.

Bryan Manzer closed the evening with a presentation outlining his goals for next year.  He outlined his goals for the F.B.L.A. for 2016-17 and thanked the members, especially the Seniors for their commitment to FBLA.  A Dessert Bar provided refreshments for the guests.