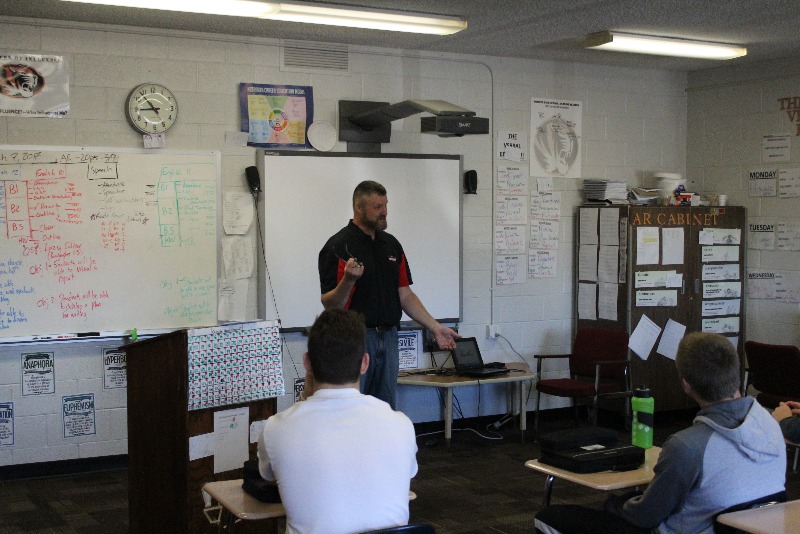 Curt Arens, a field editor for Penton Agriculture, presented information on a variety of writing, profession-related advice to seniors on Monday, March 6 at Osmond High School in Mr. Morrison’s room.

Arens’s position involves writing for a variety of magazines such as Nebraska Farmer and Dakota Farmer. He spoke to English 12 students in both first and second periods.

As a writer (journalist) and one time farmer, Arens could speak to several topics related to students’ future careers.

This began with a quick discussion on how English (and the benefits one gets from mastery the content area) is everywhere. He asked students which professions they could think of that do not involve English, and they could not find one.

Checking sources was a big point of emphasis with Mr. Arens; he noted how everything he writes must go through a fact-check.

As he brought up technology, Arens painted a picture of how his position has developed in recent years. He talked about how technology has impacted the ways that him and his colleagues produce material for their magazines.

Arens encouraged students to keep their audiences in mind when writing; he highlighted photography as an essential piece to journalism.

Overall, though, it seemed as if Arens tried as hard as possible to help students understand how important the core study areas are for students’ potential occupation.

He noted that, with technology advancing at the rate it is, the possibilities are endless for what a person’s occupation could be. So, to be prepared, students need to prepare themselves in these areas.

Arens used himself as an example. He talked about growing up wanting to be a farmer and eventually becoming a farmer, only to decide that the best way to provide for his family was to write.

He, of course, did not major in journalism, but had been involved with writing for most of his life.

We appreciate Mr. Arens donating his time to our students.