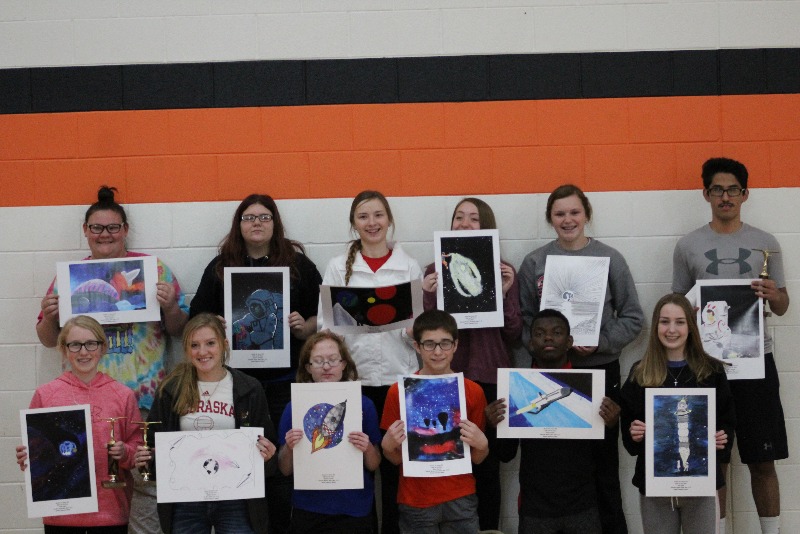 Osmond Art Students Win Awards If you have ever dreamed of flying or built a paper airplane, you have walked in the footsteps of the men and women who created the world of aviation as we know it today. Ideas were written on paper. Wooden and cloth models were built to test the designs before the actual balloons, gliders, and planes were built and tested by brave men and women in the air. What new innovations and ideas will shape the aviation of the future?

From hang gliders and parachutists, to drone pilots and citizen astronauts, the only limit to the future of flight is the imagination of builders, dreamers and pilots of today.

The Osmond Community Schools 8-12 art students tapped into their imagination and dreamed up posters for this year’s International Aviation Art Contest, with the theme of Flight Into the Future. Entries of all different mediums were sent in by numerous students from Osmond Community Schools by the January 19th deadline and on Saturday, April 14th the Nebraska Division of Aeronautics in Lincoln honored several Osmond students for their entries.

In the Intermediate Category (Ages 10-13) Hunter Beacom, Macy Aschoff, and Kiera Moes received Honorable Mention certificates and reproductions of their artworks; Bailey Schmit received the second place trophy, a reproduction of her artwork, postcards with her artwork on it, and a cash prize.

Both Bryan and Madeline received a trophy, reproduction of their artwork, and postcards with their artwork on it, along with a cash prize. The top three entries from each division were forwarded on to Washington, D.C. to be judged in the National Competition.

Good Luck to Bailey, Bryan, and Madeline at the next level of competition!