Tonight
Cloudy, with a low around 35. North northeast wind 6 to 9 mph.
Friday
A slight chance of rain showers before 8am, then a chance of rain and snow showers between 8am and 10am, then a chance of rain showers after 10am. Cloudy, with a high near 45. North northeast wind 8 to 14 mph. Chance of precipitation is 50%. New precipitation amounts of less than a tenth of an inch possible.
Friday Night
A 40 percent chance of showers, mainly before 4am. Cloudy, with a low around 35. North wind 10 to 16 mph, with gusts as high as 21 mph. New precipitation amounts between a tenth and quarter of an inch possible.
Weather forecast provided by weather.gov.
Search

FBLA raises money for the March of Dimes 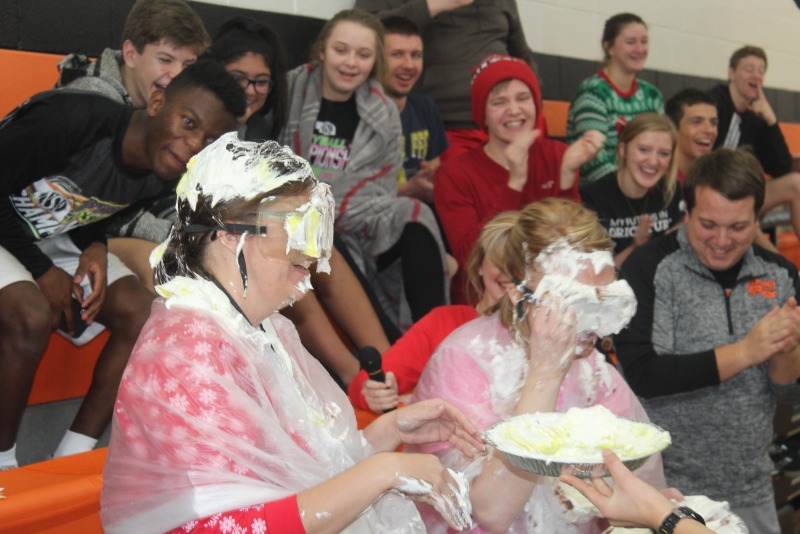 The Osmond FBLA Chapter hosted a fundraiser for the March of Dimes during the last week of school of the first semester (December 17-21) .

FBLA members placed an empty jar for each teacher on a table near entry way of Osmond Community Schools on Monday, December 17.

Directions were for students, teachers, and administrators to fill up the jar of the teacher or administrator who they wanted see be hit with a pie in the face. The deadline was Friday, December 21—the last day of first semester.

People were also given the opportunity to buy one-in-a-lifetime opportunities to win a chance to smash the pie into top money-getters faces. Two of the people who bought chances were then selected.

After much ebb and flow…After much ballyhoo…after several lead changes…after much squabbling back and forth about which school staff members would ultimately bring in the most money, Mrs. Sarah Morfeld and Ms. Jennifer Johnson ultimately prevailed.

The people selected to do the pieing were seventh graders Spencer Hille and James Doyle.

And so on Friday at 12:50 PM the 7-12 OHS student body watched as Spencer pied Mrs. Morfeld and James did likewise to Ms. Johnson.

Thanks for your cooperation, Ms. Johnson and Mrs. Morfeld!

The fundraiser ultimately made over $460 to be donated to the March of Dimes.