Tonight
Mostly clear, with a low around 37. Calm wind becoming east northeast around 5 mph after midnight.
Monday
Increasing clouds, with a high near 71. Breezy, with an east wind 5 to 10 mph becoming southeast 16 to 21 mph in the afternoon. Winds could gust as high as 28 mph.
Monday Night
Mostly cloudy, then gradually becoming mostly clear, with a low around 47. Breezy, with a south wind 13 to 18 mph, with gusts as high as 29 mph.
Weather forecast provided by weather.gov.
Search 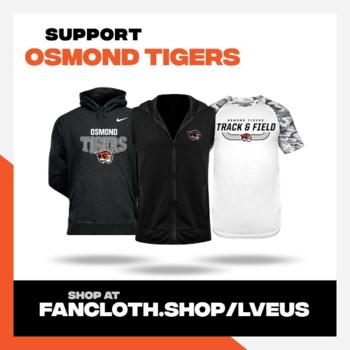 The Osmond wrestlers competed at the Lewis and Clark Conference
tournament on Thursday, Jan. 19 th . The Tigers scored 73 points and finished in 7 th
place out of the 9 teams competing. The Tigers were led by Robert Aschoff who
finished as the conference runner-up at 106 lbs. Earning third place medals for
Osmond were Patrick Vinson at 160 lbs. and Dominic True at 120 lbs. while Bodie
True placed fourth at 145 lbs.
This was a good tournament for us. We had set a goal of scoring 60 points and
finishing in 6 th place. We were missing two kids with injuries so we knew that it
would be difficult to finish high in the team standings but the kids all wrestled
well and we were still able to score 73 points with only four wrestlers. Overall we
had 11 wins and 8 losses with 5 of the losses coming to wrestlers ranked either
first or second in Class D.
Results:
Robert Aschoff
Pinned Samuel Chase Wak.
Dec. Grant Sprakel Ponca 8-1
Pinned Asher Beed QCNE
Pinned by Eli Lanham Pla.

The Osmond wrestler competed at the Neligh Invite on Saturday, Jan. 23. The
Tigers scored 27 points and finished in 20 th place out of 23 teams participating.
The Tigers had three medal winners with Bodie True and Patrick Vinson placing 5 th
at 145 and 160 lbs respectively while Dominic True finished in 6 th place at 120 lbs.
Also wrestling for Osmond but not placing was Robert Aschoff at 106 lbs.
This is always a tough tournament with a lot of teams and a lot of good
wrestlers. We started off slowly but ended up wrestling better as the tournament
went on. Bodie lost his first match but then came back to win 3 of his last 4
matches to finish 5 th at 145 lbs. Dominic had some tough competition at 120 lbs
but wrestled well enough to finish 6 th in his bracket. I told the kids even though
we didn’t wrestle as well as we would have liked we will learn from these matches
and do better next time.

The Osmond Wrestling team competed at the Plainview Invite on
Saturday, Jan. 30. The Tigers scored 13 points and finished in 15 th place
out of the 17 teams competing. Crofton Bloomfield was the team
champion followed by Plainview and Wayne. Leading the way for the
Tigers was Dominic True who finished in 3 rd place in the 120 lb. weight
bracket.
This was a rough tournament for us this weekend. We were down to
two wrestlers because of injuries and illness and only scored 13 points
which is our lowest of the season. Dominic did wrestle well though,
winning three matches and finishing 3 rd at 120 lbs. With the three wins
Dominic evens his season record at 15 wins and 15 losses. Also
wrestling for Osmond but not placing was Bodie True at 152 lbs. Bodie
ends the regular season with a record of 16-12.
Next week we should get most of our wrestlers back for the
subdistrict meet in Pleasanton on Saturday, Feb.7 th . The top four in
each weight class will advance to the district meet the following week.

Click on the link below for information regarding Osmond Community Schools Covid-19 Plan.