Today
A chance of flurries before 1pm. Cloudy, with a high near 19. North northeast wind 9 to 13 mph, with gusts as high as 20 mph.
Tonight
A 50 percent chance of snow, mainly before 3am. Cloudy, with a low around 5. East northeast wind 3 to 8 mph.
Wednesday
Mostly sunny, with a high near 18. Light and variable wind becoming south southeast 5 to 10 mph in the morning.
Weather forecast provided by weather.gov.
Search

It was an unusual week to say the least for our school and basketball team. The Tigers played Monday night at Bloomfield, a game that was moved to that evening due to the icy weather event the previous week. The Tigers controlled the game throughout and squashed the Bees 66-42.  The following 2 days would result in no school, no practice, and a cancellation of the Tiger’s Tuesday night contest at Laurel-Concord-Coleridge, before their Thursday night rematch at home against the Tigers from Ewing. Osmond got off to a slow start, leading Ewing at the end of the 1st quarter, 12-11. The second period proved to decide the game, with Osmond outscoring Ewing 26-0 as they cruised to a 65-26 victory.

“Our slow start Thursday night against Ewing didn’t really concern me. We hadn’t had school the previous 3 days and hadn’t seen the practice floor since the previous Thursday, so some rust was to be expected. When you mess with the routine of a team, it can tend to have a negative effect and I think we observed a little of that,” commented Coach Schulze. Any bit of rust the Tigers may have had quickly disappeared in the 2nd quarter, sparking a 41-4 run on Ewing to enter the 4th quarter. Osmond had an efficient night on offense, converting on 53% of their shots, including a 5 for 12 performance from behind the 3 point arc. Osmond added 16 offensive rebounds to their effort Thursday, led by Tucker Timmerman and Cole Moes, who combined for 7 of them. Three Tigers finished in double-figures. Brock had 15 points, Cole added 14, and Alex Kumm scored 11. Keaton Timmerman was just out of reach, finishing with 9 points on a perfect shooting night, going 4 for 4 from the floor and converting on his only free throw.

“I was really happy with how we played against Bloomfield. We shared the ball on offense and forced several turnovers defensively,” said Coach Todd Schulze. The Tigers shot 49% from the floor and 71% from the charity stripe. Brock Johnson and Cole Moes led the Tigers in scoring, earning 16 and 15 points respectively. Cole dished out a team-high 5 of Osmond’s 17 assists in the game. It was a solid team-victory for the Tigers, with 10 players scoring and 8 handing out at least 1 assist. “I thought our bench really played well for us in this game, in particular Brett Simmons and Kyle Swallow, who combined for 14 points, 4 rebounds, and 2 assists,” added Schulze.

“Overall, I like the way this team is developing throughout the season. I haven’t got the sense we have peaked, or played our best basketball yet,” added Coach Schulze. “A goal of any team’s season is to be playing their best towards the latter part of the season. I get the feeling we are on our way. We’ll need to demonstrate that, as there is no doubt we’ll need to bring our best effort in order to advance through conference tournament.” 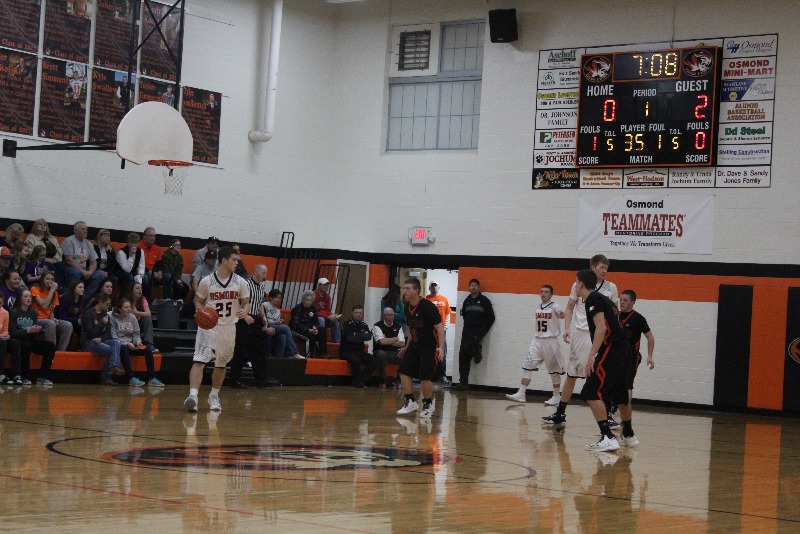