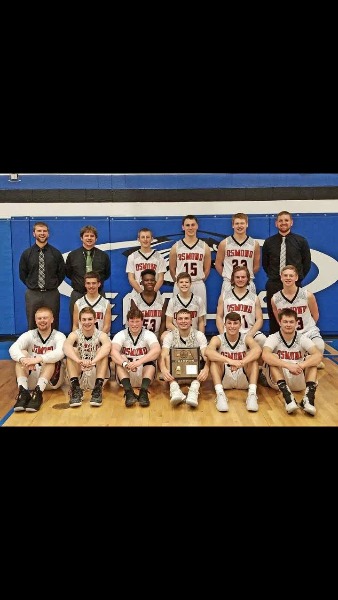 In O’Neill last Tuesday evening the Osmond Tigers claimed their first district title since 1999. They did so in dominating fashion, leading by as much as thirty points in the fourth quarter and defeating the North Central Knights 70-50.

The Knights led by one after the first quarter—a period that saw the Tigers commit a few unforced turnovers and lack some discipline in their half court offensive attack.

“During the first quarter, I felt we were a little sloppy, but after the fact when I look back on it. I think it was just excited energy leading to too many risky decisions,” commented coach Tigers Coach Todd Schulze, “our guys were highly confident they could win and I think that led to feeling over-hyped to begin the game.”

The second period proved to be the deciding factor in the contest, seeing Osmond outscore the Knights by thirteen points and take a 33-21 lead heading into halftime.

The Tigers were ignited in the second by senior Alex Kumm, who created turnovers that led to fast break points for Osmond.

Alex scored seven of the Tigers’ twenty-two points in the second quarter. The bank was also open that night; Keaton and Aaron took advantage of it, both Tigers scoring after getting some assistance from the glass before their 3-point ball could reach the hoop.

Tristan Maertins added a three the conventional way. Those treys and improved defense by Osmond led to capturing all the momentum in the second quarter and never letting go.

After half time the Tigers picked up where they left off, playing great defense and sharing the basketball on the offensive end.

Six Tigers scored in the quarter, with Drew Krienert’s four points leading the way to a 15-point quarter for Osmond.

“Our scoring was great, but what I was just as impressed with was our defense,” explained Coach Schulze, “to hold North Central to consecutive single digit scoring quarters decided the outcome of the game.”

Aaron and Justus accomplished a notable task, holding Huerter to just eight points, while not allowing any of those in a pivotal third quarter.

The Tigers lockdown defense and efficient offense propelled the orange and black to a strong finish in the final quarter.

Osmond kept rolling during the fourth quarter, leading 69-39 with just over 3:00 to go in the contest and scoring at will against the Knights.

“It became evident to me during the third and fourth quarters that we had been scoring with a balanced attack,” added Coach Schulze.

In fact, at least five players scored in every quarter for the Tigers in the District Final. Keaton Timmerman led the way with fifteen points (along with fourteen rebounds and five assists); Alex Kumm was just behind him scoring fourteen points, playing in the second district championship game of his career.

The Maertins brothers (Tristan and Justus) along with Aaron Chishiba, all contributed with nine points apiece.

Not only did the Tigers win the district championship and claim a spot in the state tournament, they also broke the Osmond single-season win record with their twenty-second victory of the season.

“I’m so proud of this team and what they have accomplished this year,” commented Todd Schulze, “it has been a special season to this point, and I know our guys aren’t satisfied yet.”

“Finally, to our student and fan support. I know I speak for our entire team when I say THANK YOU!!! Your attendance, energy, and excitement for our team in O’Neill were incredible. It was fun to see everyone share the moment wish us during the game and after the game as well. I had both the fortune and misfortune of heading to the second level of seating to participate in a radio interview shortly after the game. I regret not being around our kids and sharing the moment with them but the view I had from up top was rewarding. I’m nearly certain I spaced out responding, or listening, to one of the interview questions as I caught myself drifting away and admiring all the smiling Osmond faces out on the court. I wish I would’ve taken a picture. It was a proud moment for everyone that has been involved. Your support has been HUGE! I can’t wait to see the positive environment you will create for us in Lincoln,” Schulze said.