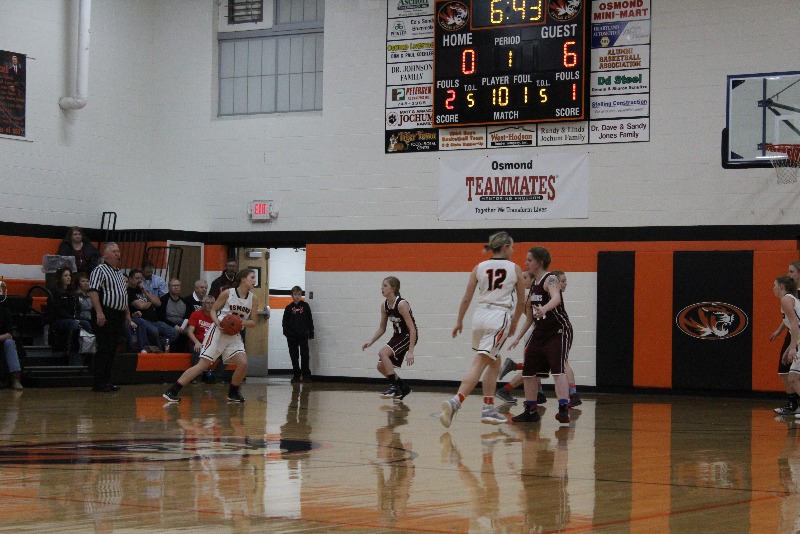 Despite allowing the Neligh-Oakdale Warriors to score the first seven points of the game and to hold a 14-7 lead at the end of the first quarter, the Osmond Lady Tigers basketball team clawed their way back into Tuesday, January 10’s game in Osmond to win 49-33.

While the outlook of the game didn’t look good in the first quarter, the Tigers calmed themselves and used the next three quarters to develop a big lead.

This started with a 15-3 run in the second quarter. The Tigers made a nice push in the final four minutes of the half especially.

Emily Bolz (Jr., G), who scored 12 points in the game, was a big part of the run. She was 5-for-8 from the field and seemed to make all her close-range shots.

In the second half, the Tigers offense caught fire. They outscored the Warriors 17-7 in the third quarter and 27-16 altogether in the half.

In particular, Caitlin Kumm (Jr., G), who had struggled to get anything to work her way in the first half, started to hit her shots.

Kumm scored 19 points and was 4-from-8 from beyond the three-point arc.

The Tigers shot 16-for-43 (37%) overall, their best performance in several games.

Andrea Schmit (Jr., G/F) also had a nice game. Not only did she score seven points, but she had nine rebounds, three steals, and two assists.

In the post, Shelby Aschoff played one of her best games of the year. She had seven rebounds and was aggressive. Makenzie Johnson (So., F) had a couple really nice assists early in the game. She also had five rebounds.

Alex Brestel (Fr., G) two rebounds, one of which was a strong offensive rebound.

Overall the Tigers out-rebounded the Warriors 44-26.

Mariah Stech (So., G) came off the bench and made a nice contribution to the team’s comeback run. She schored five points and made 3-of-5 free-throws.

The Tigers (4-6) travel to Hartington to face the Wildcats on Friday, January 13 in Lewis and Clark Conference play.

The Tigers junior varsity team played a nice game; they defeated the Warriors 25-18 in two quarters (a second half).

While the Warriors came out firing with a 12-9 lead at the end of the third quarter, the Tigers fought back and outplayed their opponents in the fourth quarter.

They outscored the Warriors 16-6 in the fourth quarter.

The epitome of the Tigers strong fourth quarter came on a loose ball when Alex Brestel (Fr., G) dove for a loose ball, ripped away from an opponent, and passed the ball to Mary Kahny (Fr., G).

Reaching for the ball, Kahny caught it and flipped to Madeline Huwaldt (Fr., F) who caught the ball at the elbow and drove it to the basket to convert on a contested layup.

Johnson added another bucket in the fourth quarter for six points total. Madeline Huwaldt (Fr., F) had a nice fourth quarter, scoring all six of her points (2 FGs and 2 Free-Throws).

Annie Eneveldson (So., F) came in for a couple spurts in both quarters.