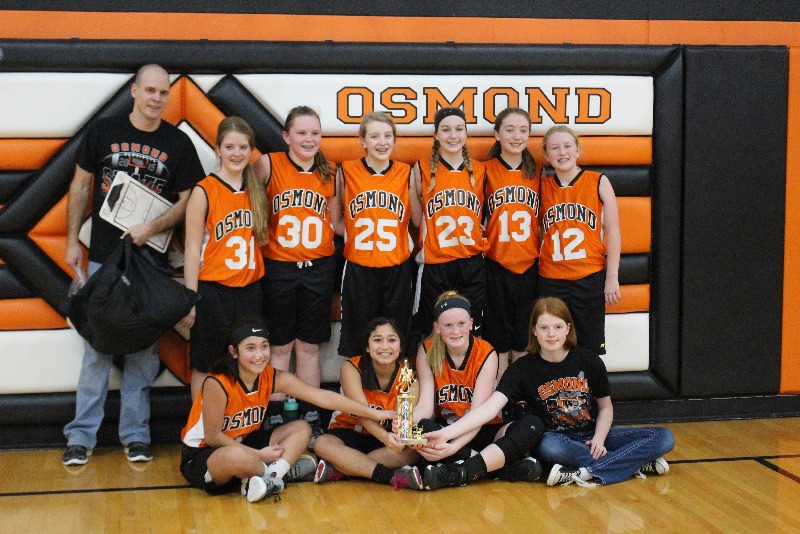 Against Randolph, the Tigers played well for most of the game and even held a 15-14 advantage until Randolph put on some full court pressure and began to hit their shots.

A rough fourth quarter was the culprit for the Tigers losing the lead. In the game, though, the Tigers had several bright spots.

Overall the Tigers were much more aggressive in this first game than they had been a few days before against Wausa in a 35-7 loss.

In the third-place game, the Tigers played well defensively; they allowed the Pirates just two baskets throughout whole game.

This started with Grace Gansebom who stepped up to the challenge of defending one of the tournament field’s best ball-handlers.

Riley Wagner (7th, F) also had a good game defensively. She does all the little things well and is willing to take the challenge of defending a physically bigger, taller player.

Of all their games up to this point, the Tigers hustled the most in this game.

Lillie Gansebom (7th, G) had the Hustle Play of the Game when, after she had missed a shot at the hoop, she ran to get the rebound and then put it in for two points.

Elisa Hererra (8th, G) also had a great hustle play. She chased down a ball in the corner by getting on the floor to get the ball.

Grace Gansebom also picked up a few rebounds because she hustled them down.

The Tigers took care of the ball well through most of the game. This was evident through their ability to break the Pirates’ press.

They passed the ball and moved it across half court quickly. Usually they could get the ball to Aschoff who, thus, would be patient with the ball and would get it to a guard.

The Tigers did a good job of hitting their easy shots and their free-throws. The Tigers were 9-for-15 from the free-throw line (60%), one of their best performances up to this point in the season.

Samantha De La Cruz (8th, F) did a nice job in the game as well. She played quite a few minutes and hustled in her chances.

The Tigers (4-6 “A”, 4-2 “B”) will now move on to their “club” season where they will play in four tournaments. This starts next week with the Wayne Youth Basketball Tournament in Wayne. The Tigers are in the 8th Grade Division and play Wayne at 11:45 am Sunday, February 18.

They will aslo participate in the Hartington Cedar Catholic Booster Club Tournament on Saturday, February 25. After this, they will play in Plainview Youth Tournament on Sunday, March 5.

To finish their season, the Tigers junior high team will play in the Hansen-Haas tournament on March 25.