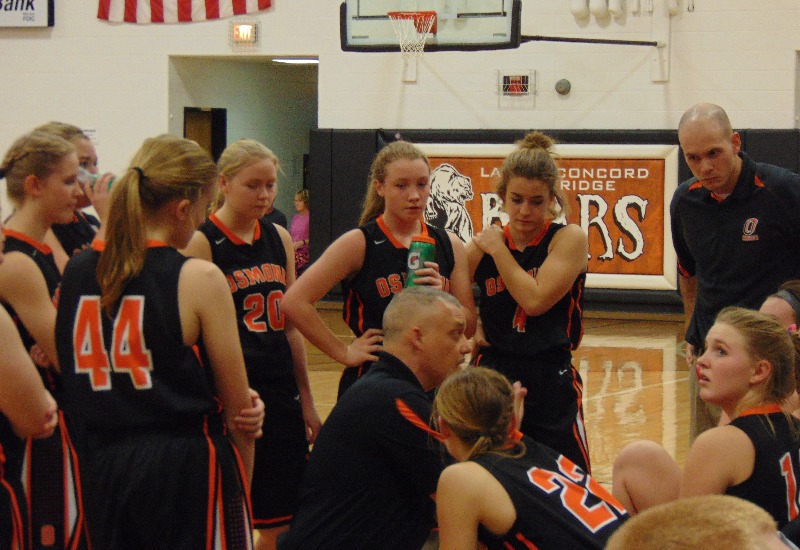 Tigers outlasted by Cardinals in Subs

LAUREL—The Osmond Tigers played one their best games of the year on Tuesday, February 14 in their D1-5 Sub-District Opening Round game against the Randolph Cardinals in Laurel.

The Tigers held a 13-12 lead just before half-time, and, despite allowing the Cardinals to climb to an 11-point lead at one point, they had cut the lead to four points near the game’s end.

The Cardinals ended up winning the game 45-37 to advance to the D1-5 Sub-District Finals against Bloomfield.

Ultimately the game came down to the Cardinals’ solid free-throw shooting (21-for-30, 70%) and early missed shots by the Tigers.

The Tigers finished the night 14-for-57 (25%) on the night, including four three-pointers. The Tigers didn’t really get their offense going until the second quarter.

Down 6-2 after the first quarter, the Tigers rebounded in the second quarter with 11 points. However, the third quarter was not kind as Randolph outscored them 15-7 to take a 29-20 lead into the fourth quarter.

The Tigers outscored the Cardinals 17-16 in the fourth quarter, including the run that got them within four points of the lead.

Osmond’s twenty-four fouls were a big factor in the game. While it’s granted that they needed to foul in the game’s waning minutes to stop the clock, the Tigers third quarter fouling was costly.

There were at least two specific situations where a Randolph post was fouled in the act of shooting and making a basket.

Comparatively speaking, the Tigers did a decent job of taking care of the ball. They had 19 turnovers, though much of the game they felt full-court pressure. (Randolph had 19 as well.)

The Tigers held a 32-28 rebounding advantage, which included 13 offensive rebounds.

Offensively the Tigers had seven scorers. Leading the way was junior Andrea Schmit with thirteen points. She hit both three-pointers she attempted. She also added a team-high nine rebounds.

Alex Brestel (Fr., G) had an efficient night off the bench. She scored five points on five shots, including a big three-pointer late in the game.

Despite being her team’s main source of offensive production throughout the year, Caitlin Kumm (Sr., G) had just five points. However, Kumm’s value was irreplaceable in other areas.

She proved vital in dribbling through the Cardinals’ pressure and in distributing the ball to her teammates (three assists).

Kelly Schuettler (Jr., F) had one of her best games of the season. She scored four points, but was valuable in her rebounding and presence in the paint. (She scored two points off a big offensive rebound.)

Seniors Shelby Aschoff (Sr., F) and Kendyl Koehler (Sr., F) both contributed in their final game as Tigers. Bailee Gillespie (Sr., G) did not play due to a recurring knee injury.

Shelby Stelling (Jr., F) spelled forwards throughout the night; she came in the game late to foul.

The Tigers season comes to a close at 5-15. Their five wins came against Plainview, Creighton, Allen, Neligh-Oakdale, and Winside.

They got off to their best start (3-4) in four seasons, but had a difficult time in the second semester (2-11).

“This team might not have had the most wins the last few years, but the progress they’ve made as basketball player and, more importantly, as young ladies of character will last them a lifetime,” Brown added.

Although poor shooting seemed to be a thorn in the Tigers’ side throughout the year, their opponents were only able to score eighteen more baskets than them over the course of the season (Osmond 266-1,103 24%, Opponents 284-892 32%).

Johnson was the team’s most efficient shooter. She was 35-for-119 (30%) from the field. While she didn’t take many shots per game, Emily Bolz hit 30% of what she did take.

Turnovers were a bit of a hindrance for the Tigers who had 402 compared to their opponents’ 377.

The bright spot for the Tigers was rebounding. They out-rebounded their opponents by nearly 100 rebounds (Osmond 709, opponents 611).

Schmit (136) and Schuettler (126) were the team’s better rebounders. The Tigers did have four girls who averaged over five rebounds per game.

The Tigers say good-bye to Aschoff, Gillespie, and Koehler; thanks to you for all of your hard work!

“I was so proud of our girls this year, and I will miss them as I move on,” Brown finished.

Coach Brown and his family are planning to move to Spencer at the end of the school year.