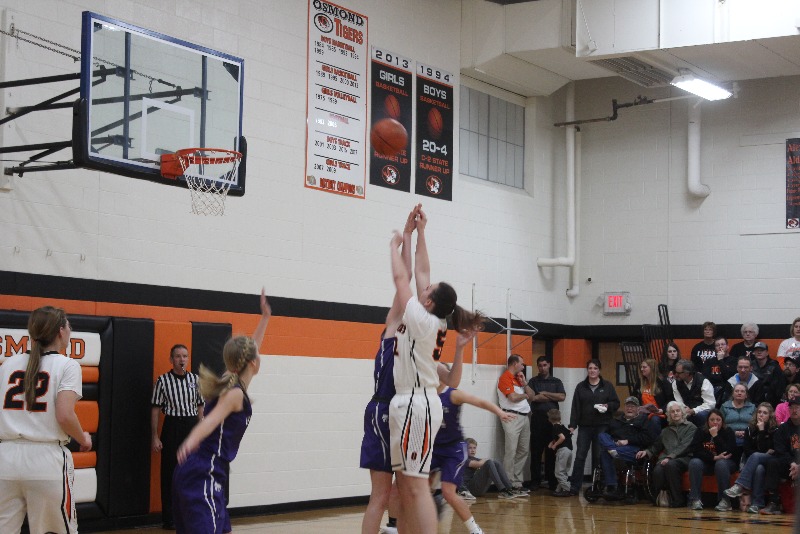 Osmond Basketball Teams traveled to Neligh for non-conference games last Tuesday evening. The varsity games were televised on News Channel Nebraska 35#. The host team jumped out to an early lead against Osmonds Lady Tigers.  Both teams were battling through sickness with the colds and flu's that were circulating around in the area. Trinity Kurpgewut scored 8 of the Lady Warriors first quarter points as they ended the period with a 13-12 lead over OHS. Both teams struggled to pull away from each other before halftime. Caitlin Kumm made 9-10 free throws before halftime along with a couple of buckets giving OHS a 29-28 lead at the break.

The third quarter was huge for OHS as they turned up a woman/woman press, stole the ball and created numerous turn overs. Makenzie Johnson led the team in scoring with 6 points followed by 5 other teammates scoring and racking up 24 total points in the quarter.  With a balanced attack and better ball control, OHS dropped in 17 more points in the final stanza to get a 69-57 win over Neligh/Oakdale. Osmond was led in rebounding by Andrea Schmit and Makenzie Johnson with 7 boards each. Top scorer was Caitlin with 29 points followed by Andrea with 12.  Shelby Stelling made a huge steal at the right time taking it in for a layup and breaking the game wide open for OHS.

With the win Osmonds Lady Tigers improved to 7-4 0n the season.

The Lady Wildcats came into town sporting a 10-2 record and left with one more win. OHS just couldn't get things going as Hartington-Newcastle jumped out to a 12-4 lead in the first period. Things didn't get better by half-time as the scoreboard read 19-8 in favor of H/N.  The third quarter was our strongest as OHS was able to make a good run an close the gap, scoring 15 points in this quarter. We just couldn't get anything established in this game as the Wildcats walked away with their 11th win. Caitlin led both teams in scoring with 16 points. Makenzie, Andrea, and Caitlin led in rebounding with11, 8 and 7. With the loss OHS drops to 7-5.