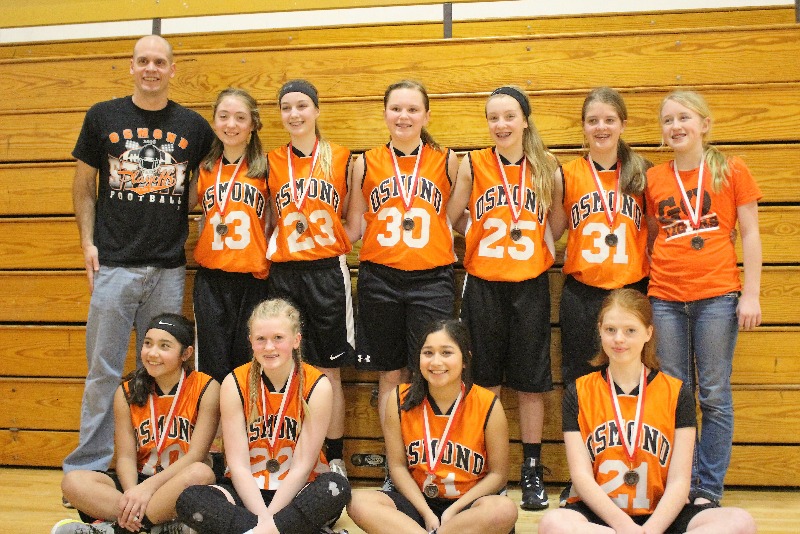 The tournament began well for Tigers who were neck-in-neck through the entire first half with a bigger Niobrara-Verdige team (6-4 NV at halftime).

In the second half of the game, though, the Tigers were outscored 19-8. Many of their points came in the last two minutes.

Macy Aschoff (7th), who had not been able to play for a couple weeks, stepped in and had a nice game. She scored a team-high six points.

In their second contest, the Tigers came out with much better energy and effort. They did a nice job defensively, especially in the second half. (They allowed four points.)

The Tiger post players adjusted to a set play Creighton was running and shut down their offense.

Down 12-10 with about :30 left in the game, the Tigers got a basket from Aschoff to tie it up; however, Creighton hit two free-throws to take the lead again.

The Tigers nearly got an opportunity at their hoop in the final ten seconds when Creighton turned the ball over.

This was on an inbounds where Creighton tried to throw the ball down the court and it went out of bounds. The ball would have gone back to the Tigers, but a Creighton player just barely tipped it before it went out.

The Tigers then could not advance the ball up the court in time to get a look at the hoop.

Throughout the game, though, they did a really nice job of moving the ball around the perimeter.

Lillie Gansebom (7th) did a great job as a guard. She kept the ball moving when she got in the game.

Jozie Kumm (8th) came into the game and covered for Herrera who had fouled out. She had a good look at the hoop, but couldn’t quite get it in.

Sam DeLaCruz (8th) worked in as a post throughout the first two games.

The third game of the tournament was the most interesting for the Tigers.

They didn’t quite play the best through about three quarters of the game, but they found a way to erase an 8-point Plainview lead, send the game into overtime, and then win it.

Their defense wasn’t terrible throughout the game, but it seemed like the Tigers really vamped up the intensity in the last three minutes of the game.

This included the Hustle Play of the Tournament by Kiera Moes who scored a basket and then stole the inbounds pass.

Scoring three points in the first half, the Tigers offense was bleak; however, they outscored Plainview 10-6 in the second half.

Moes scored four points (2-of-2 from the line). Grace Gansebom scored three points in the second half, and Riley Wagner had a nice basket late in the game.

Down 13-12 with less than :10 left in the game, the Tigers had three of four shots at the hoop. Aschoff was fouled and put on the line with just under :01 left.

She hit both her free-throws, but one was called off due to a line violation.

In overtime, Wagner stepped up with three points (a basket and a free-throw).

The Tigers defense was solid throughout overtime. They didn’t allow a point.